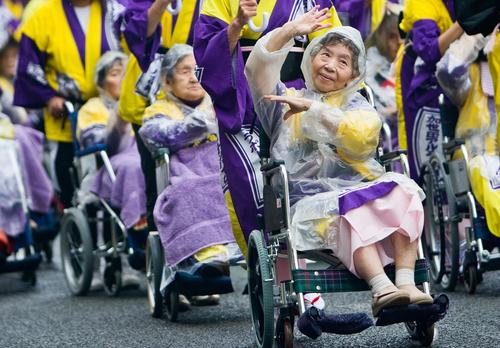 Since 2000, Japan has managed to offset its shrinking labour force with increased worker productivity – at a rate higher than most other advanced economies. But, Japan’s productivity gains are soon reaching its limits and the nation must once again find new solutions to maintain economic progress amidst the world’s fastest aging population.

In his last speech as Governor of the Bank of Japan, Masaaki Shirakawa gave a detailed account of what is required to strengthen growth in Japan – a problem that has plagued both politicians and central bankers for two decades.

He analyses the impact of an ageing population on Japan's productivity by pointing out that the growth rate in an economy breaks down into a) the growth in the number of workers and b) increases in the value added productivity of each worker. The fact that Japan is already experiencing a rapid ageing of its work force means that the number of workers in Japan is declining by -0.6 percent per annum through the present decade, and that this decline will accelerate slightly to -0.8 percent through the 2020s. It would be interesting to run the figures forward for the next two decades, when the results would probably be pretty dire, but wisely, perhaps, Shirakawa only looks 20 years ahead.

Related: One-Third of Japan’s Population To Disappear By 2060

The decline in growth resulting from falling worker numbers is expected to be offset by the rate of labour productivity growth experienced by Japan in the period from 2000 up to the 2008 crash. This amounted to 1.4 percent annually for those nine years, though Shirakawa admits that this was a very favourable period as far as the economy is concerned, so that kind of increase in productivity cannot be guaranteed.

However, taking it as the going rate, as it were, he then subtracts the percentage decline in the number of workers from the productivity increase, to produce a figure of 0.8 percent annualized growth for Japan through to 2020, and 0.6 percent going forward from there. This is not exactly dynamic growth, but hey, it is positive!

One needs to make the point at this juncture – a point that Shirakawa would not find it politically easy to make, one imagines – that the classic expedient open to say, the U.S., of offsetting ageing by encouraging the inward migration of younger foreign workers, is completely ruled out in Japan by the country's xenophobic attitude towards "polluting" the Japanese nation with any kind of open doors policy. This is not an exclusively Japanese phenomenon. Many U.S. citizens are hugely anti the influx of illegal workers coming across the Mexican border, for example, but it definitely rules out mass immigration as a solution to the country's labour issues any time in the foreseeable future.

Shirakawa points out that although Japan has managed to increase labour productivity slightly ahead of the G-7 group average, cranking it up another percentage point is not really a tremendously likely proposition. So productivity gains are not going to be an easy route to saving Japan. However, it is probably the most important route open for Japan, so as he puts it:

"... Raising Japan's growth potential continuously into the future requires work, especially strenuous work, on both the number of workers and the labour productivity growth rate. While efforts by a range of entities are necessary in such case, the main actors here, above all, are private firms."

Related: The Return Of Abenomics: A New, Old Hope For Japan’s Economy?

He points out that both Japanese corporate and those in the major advanced economies, are running up cash surpluses on their balance sheets, largely because of the lack of attractive investment opportunities at home. The proportion of Japanese firms without external borrowings currently stands at around 43 percent. This cash is sitting idle and firms need to do one of three things, invest or return the money to either workers through wage increases, or to shareholders who can then shift the funds into more high growth, investment orientated companies.

If this happens it will have a positive increase on productivity, but while the cash is sitting idle on corporate balance sheets it is acting as a drag on growth, he says.  To get them to spend again requires a change in the business environment, which again, is why growth matters. Growth makes companies feel confident and opens the purse strings.

One avenue that Japan can take to address productivity declines associated with an ageing population is for Japanese firms to expand their overseas business activities, particularly in fast growing emerging economies with youthful populations. Cash flows returning to Japan in the form of interests and dividends will not directly contribute to raising GDP, but it will raise real Gross National Income (GNI). The country also needs to make more use of the elderly in employment and get more women into the labour market.

Related: Racing Against Time: Will Asia Grow Old Before Getting Rich?

Related: Returning The Reserves: Why Japan Must Focus On Consumption Not Investment

Shirakawa points out that Japanese companies in general have a longer history than U.S. companies (they were founded earlier), which speaks to their ability to transform themselves and to renew their product line up. He also called for some fairly sweeping changes in regulation, in particular for a more flexible labour market, backed by an enhanced safety net for those made redundant, and for better corporate governance and transparency. Corporate restructuring also needs to be made easier so that companies can adjust to meet changing market demand. And Japanese companies need to innovate more. Instead of making gradual improvements in existing products they need to put more focus on breakthrough technologies and completely new products if they want to drive growth.

It is hard to argue with any of his conclusions and it has to be said that this was a fine speech by an outgoing Governor. It remains to be seen whether or not his successors and the country's politicians and business folk will learn from his analysis.

Bank of Japan analyses the ageing dilemma and other headwinds is republished with permission from the QFinance Blog. Get the QFinance Dictionary of Business and Finance iOS app for a comprehensive guide to financial terms and expressions.

See also: Racing Against Time: Will Asia Grow Old Before Getting Rich?See also: The Missing Link in Japan’s Lost Decades