A Global Transcendence of Change – What The 99% Really Want: Joseph Stiglitz 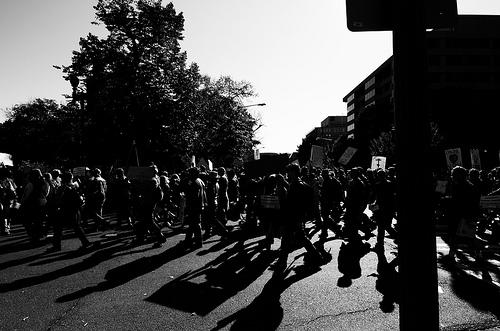 Across the world, protestors are agitating for change. On one level, the protesters are asking for little: a chance to use their skills, the right to decent work at decent pay, a fairer economy and society. Their hope is evolutionary, not revolutionary. But, on another level, they are asking for a great deal: a democracy where people, not dollars, matter, and a market economy that delivers on what it is supposed to do.

NEW YORK – The protest movement that began in Tunisia in January, subsequently spreading to Egypt, and then to Spain, has now become global, with the protests engulfing Wall Street and cities across America. Globalization and modern technology now enables social movements to transcend borders as rapidly as ideas can. And social protest has found fertile ground everywhere: a sense that the “system” has failed, and the conviction that even in a democracy, the electoral process will not set things right – at least not without strong pressure from the street.

In May, I went to the site of the Tunisian protests; in July, I talked to Spain’s indignados; from there, I went to meet the young Egyptian revolutionaries in Cairo’s Tahrir Square; and, a few weeks ago, I talked with Occupy Wall Street protesters in New York. There is a common theme, expressed by the OWS movement in a simple phrase: “We are the 99%.”

That slogan echoes the title of an article that I recently published, entitled “Of the 1%, for the 1%, and by the 1%,” describing the enormous increase in inequality in the United States: 1% of the population controls more than 40% of the wealth and receives more than 20% of the income. And those in this rarefied stratum often are rewarded so richly not because they have contributed more to society – bonuses and bailouts neatly gutted that justification for inequality – but because they are, to put it bluntly, successful (and sometimes corrupt) rent-seekers.

This is not to deny that some of the 1% have contributed a great deal. Indeed, the social benefits of many real innovations (as opposed to the novel financial “products” that ended up unleashing havoc on the world economy) typically far exceed what their innovators receive.

But, around the world, political influence and anti-competitive practices (often sustained through politics) have been central to the increase in economic inequality. And tax systems in which a billionaire like Warren Buffett pays less tax (as a percentage of his income) than his secretary, or in which speculators, who helped to bring down the global economy, are taxed at lower rates than those who work for their income, have reinforced the trend.

Research in recent years has shown how important and ingrained notions of fairness are. Spain’s protesters, and those in other countries, are right to be indignant: here is a system in which the bankers got bailed out, while those whom they preyed upon have been left to fend for themselves. Worse, the bankers are now back at their desks, earning bonuses that amount to more than most workers hope to earn in a lifetime, while young people who studied hard and played by the rules see no prospects for fulfilling employment.

The rise in inequality is the product of a vicious spiral: the rich rent-seekers use their wealth to shape legislation in order to protect and increase their wealth – and their influence. The US Supreme Court, in its notorious Citizens United decision, has given corporations free rein to use their money to influence the direction of politics. But, while the wealthy can use their money to amplify their views, back on the street, police wouldn’t allow me to address the OWS protesters through a megaphone.

The contrast between overregulated democracy and unregulated bankers did not go unnoticed. But the protesters are ingenious: they echoed what I said through the crowd, so that all could hear. And, to avoid interrupting the “dialogue” by clapping, they used forceful hand signals to express their agreement.

They are right that something is wrong about our “system.” Around the world, we have underutilized resources – people who want to work, machines that lie idle, buildings that are empty – and huge unmet needs: fighting poverty, promoting development, and retrofitting the economy for global warming, to name just a few. In America, after more than seven million home foreclosures in recent years, we have empty homes and homeless people.

The protesters have been criticized for not having an agenda. But this misses the point of protest movements. They are an expression of frustration with the electoral process. They are an alarm.

Related: The Economics of Dissent

The anti-globalization protests in Seattle in 1999, at what was supposed to be the inauguration of a new round of trade talks, called attention to the failures of globalization and the international institutions and agreements that govern it. When the press looked into the protesters’ allegations, they found that there was more than a grain of truth in them. The trade negotiations that followed were different – at least in principle, they were supposed to be a development round, to make up for some of the deficiencies highlighted by protesters – and the International Monetary Fund subsequently undertook significant reforms.

So, too, in the US, the civil-rights protesters of the 1960’s called attention to pervasive institutionalized racism in American society. That legacy has not yet been overcome, but the election of President Barack Obama shows how far those protests moved America.

On one level, today’s protesters are asking for little: a chance to use their skills, the right to decent work at decent pay, a fairer economy and society. Their hope is evolutionary, not revolutionary. But, on another level, they are asking for a great deal: a democracy where people, not dollars, matter, and a market economy that delivers on what it is supposed to do.

The two are related: as we have seen, unfettered markets lead to economic and political crises. Markets work the way they should only when they operate within a framework of appropriate government regulations; and that framework can be erected only in a democracy that reflects the general interest – not the interests of the 1%. The best government that money can buy is no longer good enough.

See also: How the Rich are Spending in 2011See also: American Companies Sitting Atop A Pile Of CashSee also: The Ten Richest People on the Planet