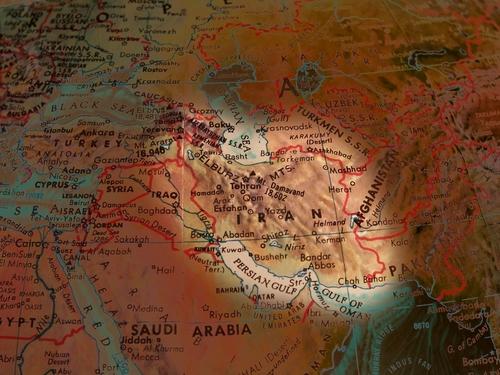 The Obama administration in June introduced its ninth set of international sanctions aimed at driving Iran’s oil sales to a halt. If we are very lucky, the United States’ stepped up financial pressure could get Iran to back down on its nuclear weapons programme. But if we are less lucky, we may find ourselves with spiking oil prices.

A June 6, 2013, article from Reuters is titled, “Lawmakers in new drive to slash Iran’s oil sales to a trickle.” According to it,

U.S. lawmakers are embarking this summer on a campaign to deal a deeper blow to Iran’s diminishing oil exports, and while they are still working out the details, analysts say the ultimate goal could be a near total cut-off.

My concern is that the new sanctions, if they work, will put the United States and Europe in a worse financial position than they were before the sanctions, mostly because of a spike in oil prices. 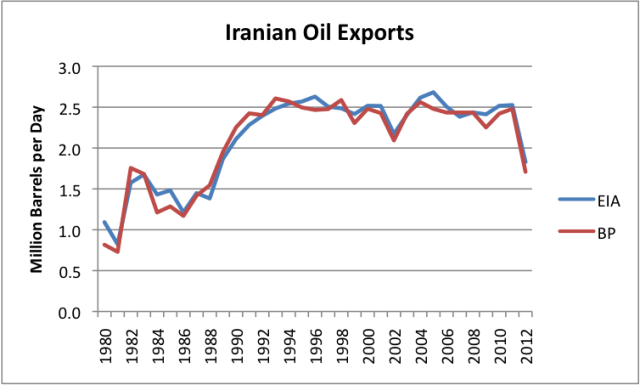 Figure 1. Iranian oil exports, based on BP and on EIA data.

If the ultimate goal is “close to total cut-off,” an obvious question we should be asking ourselves is whether it makes sense to handicap world oil production by close to 2.5 million barrels relative to 2011, or close to 1.5 million barrels relative to May 2013. Oil prices have spiked in the past when there has been an interruption in world oil supply. Why wouldn’t they this time? Furthermore, who are really handicapping: Ourselves or Iran?

I would argue that we do not have adequate sources of backup oil supply. We are operating too “close to the edge” when it comes to world oil capacity. 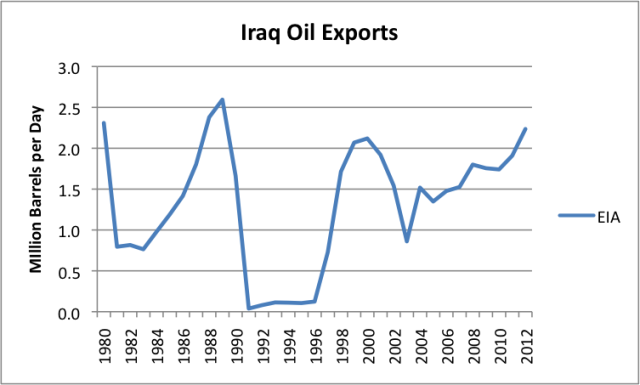 How about the supposedly miraculous growth in US oil supplies? If we look at the actual data, we see that the United States is still a major oil importer, even when such sources as “biofuels” are included in the total. (Imports are the gap between the”consumption” and “production” lines.) 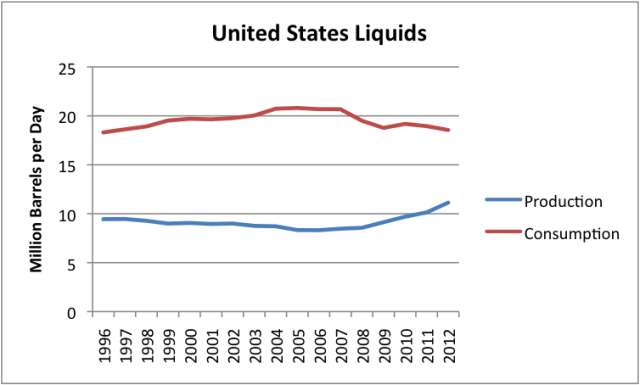 Figure 3: US Liquids (oil including natural gas liquids, “refinery expansion” and biofuels) production and consumption, based on data of the EIA.

At the same time, Europe keeps falling behind farther, so it needs increasing amounts of imports. 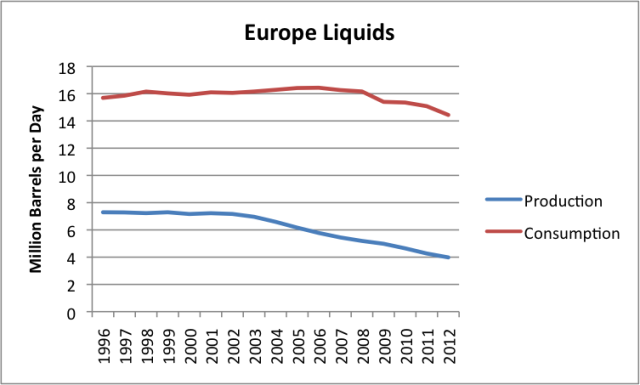 Figure 4: European Liquids (oil including natural gas liquids, “refinery expansion” and biofuels) production and consumption, based on data of the EIA.

If Oil Supply Cushion is Less

Suppose that we somehow, miraculously, take Iranian oil exports off-line and find enough substitute supply without oil prices spiking too badly. We know too well from experience that there is the distinct possibility that part of current oil supply will later be taken off-line, for some unplanned reason.  This might be another Arab Spring revolution, or perhaps fighting may break out between two oil producers. Or the United States may have a bad hurricane season. So even if oil prices don’t spike immediately, removing what little spare capacity there is, increases the likelihood that oil prices will spike in the future, from some unrelated cause.

Who Gets Hurt With An Oil Price Spike?

The countries that are most hurt by high oil prices are the big oil importers–the United States, the European Union, and Japan. We can see this with recent experience, shown in Figure 6 below. Oil prices have been high since 2005.  These high oil prices have led to a cutback in consumption by oil importers, even as other countries more-or-less sailed along. The countries with lower oil consumption since 2005 are precisely the ones that have had problem with recession. 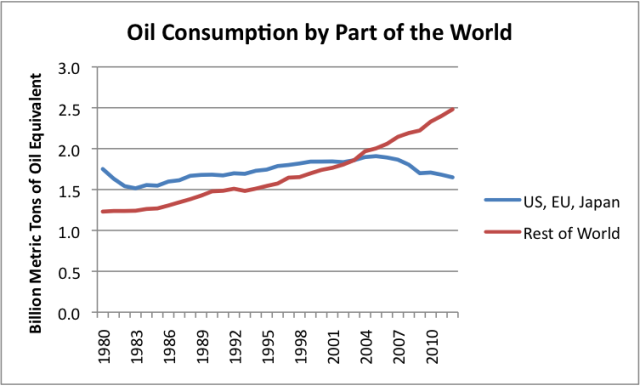 If oil prices rise, more money will be transferred from oil importers to oil exporters. Oil exporters, such as the members of OPEC, will benefit. Of course, Iran itself will not benefit. Oil importing countries that have been having trouble with their debt loads are likely to have even more difficulty, because their citizens are made poorer by high oil prices.

The sanctions cause Iran to leave its oil in the ground until later. While this hurts the Iranian economy now, the oil will still be there for extraction later. With the fields “rested,” Iran may even be able to increase the amount that can be extracted later. If oil prices are higher later, Iran will get the benefit of the higher prices. The oil supplies of other countries will also be more depleted then, so it will have more of an advantage than it does now.

With all of the sanctions against Iran, the country has been encouraged to ramp up its natural gas production. It has also increased its fleet of natural gas-powered cars, so that it has more such cars than any other country in the world. Iran is also refining more of its oil, making itself less dependent on gasoline imports. Making these changes now makes Iran more self-reliant in the long-run.

A person might think that all of the sanctions to date have significantly reduced the standard of living of a typical Iranian. If this is true, it is not showing up much in the data. Prior to 2012, the economy had grown consistently for two decades. The sanctions led to an estimated decline in real GDP of -1.9% in 2012, according to the CIA World Fact Book.  Iran’s per capita use of energy has been rising, and continues to do so, even in 2012. Its per capita energy use is now higher than Italy’s. 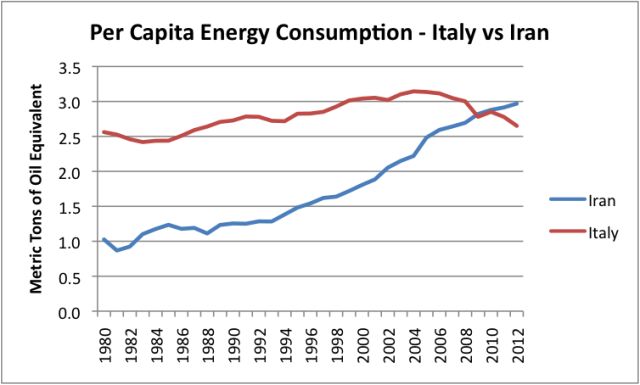 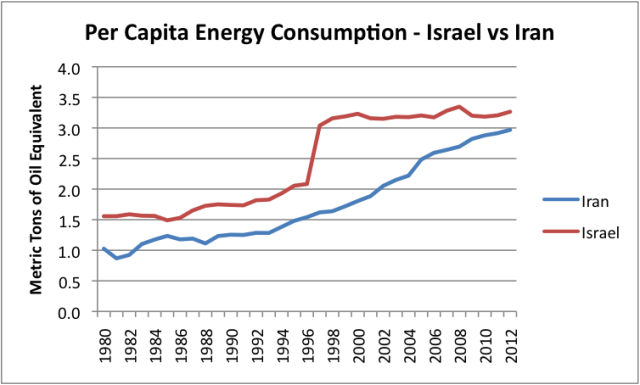 “The idea is to cause depreciation of the rial and make it unusable in international commerce,” he said. “On July 1 we will have the ability to impose sanctions on any foreign bank that exchanges rial to any other currency or that holds rial-denominated accounts.”

The move is intended to toughen sanctions that so far failed to press the Islamic republic to halt its nuclear program. According to the Treasury, the rial has lost more than two-thirds of its value in the past two years, trading at 36,000 per U.S. dollar as of April 30, compared with 16,000 at the start of 2012.

Interesting! Isn’t devaluing the currency exactly what Japan and all of the countries doing Quantitative Easing have been trying to do, perhaps to a lesser degree? As a result, Iran’s stock market has been soaring. Iran is a country that has two export products that other countries want to buy: oil and natural gas. It has little debt, and in the past has been running a budget surplus. Making more rial to the dollar makes imports to Iran more expensive, but exports more competitive in the world marketplace. This is precisely what other countries have been trying to accomplish.

Related: Iran to Subsidise Food for Poor As Sanctions and Inflation Cripple Economy

I am skeptical this rial marginalization will work. Will these changes make any difference, in terms of trade with China and Russia? For that matter, will countries that want to buy natural gas from Iran stop trading with Iran? There are ways around any barriers we put up. The US dollar is the world’s reserve currency, but it is already under pressure in that role. Doesn’t all of this messing with the rial lead to more pressure to move away from the US dollar in its role as a reserve currency? Countries that have products to sell that are in short supply globally can usually find a way to sell them. The countries that seem to have much worse problems are those with nothing that the rest of the world wants to buy–Greece, Spain, etc.

All of this posturing looks like a power struggle between the East and the West.  The techniques the West has been using so far haven’t been working all that well. The plan is to step up the same techniques, in the hope they will work better. It is not all that clear that they will–if they work, they may quite possibly backfire, because we are working with world oil supply, in a world where oil supply is still constrained. Reducing world oil supply by the amount of Iran’s oil exports doesn’t help the West at all.

Related: Russia Calls on Iran and World Powers to Stop Bickering “Like Children”

There have been a lot of exaggerated reports, seeming to suggest all is right now with world oil supply. The danger is that US leaders are now starting to believe what they read. Supply is now available, because of high price. Price is high because of the problem of diminishing returns leading to ever higher prices required to make oil extraction profitable for exporters. Demand is now down in the West, because high prices are leading to job loss and recessionary forces there. Pushing the world further in this direction is hardly helpful.

If we are very lucky, the United States’ stepped up sanctions could get Iran to back down on its nuclear weapons program (assuming it has one). But if we are less lucky, we may find ourselves with spiking oil prices. To make things worse, we may see the role of the United States dollar as the world’s reserve currency destabilized. It seems to me that we are playing with fire.

Gail Tverberg is a trained casualty actuary who writes about the impact of the limited supply of oil. She speaks internationally about oil issues, and writes frequently about the issue on her blog, Our Finite World and on The Oil Drum (where she is an editor). Tverberg is also a Fellow of the Casualty Actuarial Society and a Member of the American Academy of Actuaries. She has a Masters Degree in Mathematics from the University of Illinois, Chicago.

Additional Iranian Oil Sanctions May Be Counterproductive is republished with permission from Our Finite World.