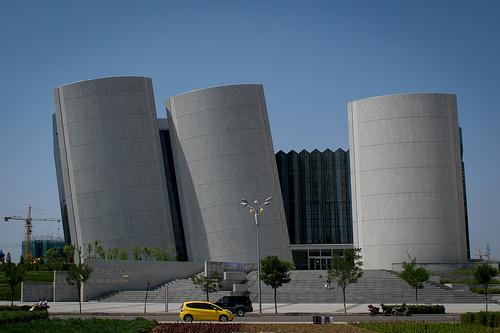 Just before Christmas, we ran a long analysis of China's complex housing situation, noting that,

despite a literal over-abundance of housing in general, and luxury dwellings in particular, residential real estate prices are continuing to rise ,

even though there are clearly hundreds of millions of poor Chinese who are in need of a major housing upgrade.

These strange dynamics of China's property market can be further seen in the Inner Mongolian city of Ordos.

By many measures, this resource-rich city in northern China is a fabulous success.

It has huge reserves of coal and natural gas, a fast-growing economy

and a property market so sizzling hot that virtually every house put up for sale here is immediately snapped up.

There is just one thing largely missing in the city’s extravagant new central district:

But the tomorrowland version of Ordos — built from scratch on a huge plot of empty land 15 miles south of the old city — is all but deserted.

And weeds are beginning to sprout up in luxury villa developments that are devoid of residents.

“Most of the people who come to our restaurant are government officials and their guests. There aren’t any common residents around here.”

City leaders, cheered on by aggressive developers, had hoped to turn Ordos into a Chinese version of Dubai  —

transforming vast plots of the arid, Mongolian steppe into a thriving metropolis.

They even invested over $1 billion in their visionary project.

But four years after the city government was transplanted to Kangbashi,

and with tens of thousands of houses and dozens of office buildings now completed,

a “ghost town” monument to excess and misplaced optimism.

City leaders may be basing their optimism on the financial windfall in recent years for Ordos,

which sits atop one of the world’s biggest reserves of coal,

whose price has soared along with China’s voracious energy appetite.

Formerly impoverished, the region now has a growing number of coal millionaires

and the nation’s highest gross domestic product per capita ($19,679) ,

with Land Rovers a leading symbol of Ordos’s newfound affluence.

“I started my company in 1988; before that, I was a low-level government official,”

said Zhang Shuangwang, 66, chairman of the Yitai Group, one of the region’s biggest privately owned coal and transport companies.

We bought a coal mine.”

and Wall Street is courting his $4 billion company to help one of its units prepare a public stock listing.

In 2004, with Ordos tax coffers bulging with coal money, city officials drew up a bold expansion plan to create Kangbashi,

a 30-minute drive south of the old city center on land adjacent to one of the region’s few reservoirs.

Because land auctions are a major source of fiscal income for cities and provinces in China,

part of the plan’s allure was the prospect of elevating the value of property in an undeveloped area.

As China’s roaring economy fuels a wild construction boom around the country,

sending shock waves through the banking system of a country that for the last two years has been the prime engine of global growth.

apparently to dampen speculation in the property market.

But within China, analysts doubt the small increase in lending rates will slow

the incredible building bonanza that is reaching even remote regions, like this one.

Analysts estimate there could be as many as a dozen other Chinese cities just like Ordos, with sprawling ghost town annexes.

In the southern city of Kunming, for example, a nearly 40-square-mile area called Chenggong has raised alarms

because of similarly deserted roads, high-rises and government offices.

And in Tianjin, in the northeast, the city spent lavishly on a huge district festooned with golf courses, hot springs

and thousands of villas that still remain empty five years after completion.

is being driven by smart planning -- or propelled by speculative madness --

Fearing inequality and social unrest, China’s national government has struggled to rein in soaring property prices and stem the threat of inflation,

even as ambitious local officials continue to draw up blueprints for new megacities.

And if government-run banks balk at providing additional loans to developers, underground, gray-market lenders are only too happy to step in.

the building boom is driven by frenzied investors — not the housing needs of millions of migrating workers.
“People are using real estate as an investment, as a place to store cash — they treat it like gold,” Professor Chovanec said.

“They’re stockpiling empty units. This is going on in cities of virtually every size.”

But in Ordos, in north China’s sparsely populated Inner Mongolia region, there is little second-guessing.

Cranes are everywhere, as construction moves ahead on a $450 million financial district in Kangbashi, a site that will feature six high-rise office towers.

Property development here is so hot that last year, housing sales in Ordos reached $2.4 billion, up from $100 million in 2004, according to government statistics.

During that span, the average square-foot price of commercial and residential property has risen by 260 percent, to $53.

“This is a city of the future,” Li Hong, a government official, said during a recent tour of Kangbashi.

“We are going to build this into a center of politics, culture and technology. That is our dream.”

But the future has not yet arrived, despite Mr. Li’s best efforts to persuade a visitor otherwise.

“You can see there’s real energy here,” he said one afternoon, looking out onto the mile-square town commons,

even though only a few dozen people — presumably government workers — could be seen on the vast square,

The vacant amenities surrounding the square include a theater, an opera house and an art museum.

Only a few minutes earlier, Mr. Li escorted a reporter through an empty 500,000-square-foot convention center

and a 12-story office tower that had dark hallways, locked doors and just a few scattered souls.

“The media who said this was a ghost town came and took photographs at 6 or 7 in the evening,” said Mr. Li,

noting that many government workers continue to commute from the old town because of the lack of stores and restaurants in the new area.

In the building spree, home buyers could not get enough of Kangbashi and its residential developments,

Some buyers were like Zhang Ting, a 26-year-old entrepreneur who is a rare actual resident of Kangbashi, having moved to Ordos this year on an entrepreneurial impulse.

“I bought two places in Kangbashi, one for my own use and one as an investment,”

“I bought it because housing prices will definitely go up in such a new town. There is no reason to doubt it. The government has already moved in.”

Asked whether he worried about the lack of other residents, Mr. Zhang shrugged off the question, according to this article in the New York Times .

“I know people say it’s an empty city, but I don’t find any inconveniences living by myself,”

said Mr. Zhang, who borrowed to finance his purchases.