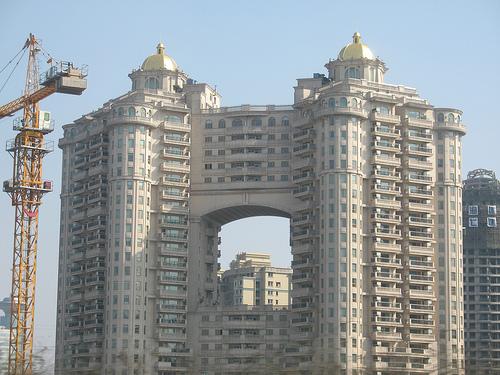 21 December 2010. How many flats in China are sitting empty?

It's been said many times that China is experiencing a nationwide urban property price bubble.

Some months ago, the Chinese media floated a story – denied by power companies –

That led to speculation that China has enough empty apartments to house 200 million people.

Statistical transparency is lacking in this area, so the truth about empty apartments remains under wraps.

But high prices in major cities where most of the country's property value is concentrated are difficult to explain clearly.

Rising rents are a little easier to explain, however, even in the face of empty flats everywhere.

Some blame intermediaries for ramping up the market, but this explanation is hard to accept, given China's fragmented intermediary real estate industry.

so they charge higher rents now to plan for higher costs.

That said, what remains hard to figure in is how higher rents can stick,

given what seems to be an unprecedented amount of living space.

This huge stock of empty flats equals not a price - but a quantity - bubble.

Quantity bubbles are less common than price bubbles, and they don't last as long.

although an influx of money can hold up prices even when supply is rising.

Quantity and price bubbles may grow together.

Southeast Asia, for example, experienced a quantity-cum-price bubble that lasted several years in the 1990s.

As regional currencies were pegged to the dollar, loose monetary conditions were imported from the United States, fuelling a property bubble.

Due to few restrictions on urban development, rising prices led to massive increases in supply.

But when U.S. monetary policy tightened, the market crashed and triggered the Asian Financial Crisis.

The latest experience in the U.S. market was mainly based on a price bubble,

although some cities such as Las Vegas and Miami saw quantity bubbles as well.

When Taiwan experienced a price-cum-quantity bubble in the late 1980s,

analysts determined the number of empty flats by obtaining electricity meter data from the power supplier,

leading many to conclude that about 15 percent of all flats were empty.

Today, some analysts are trying the same tactic in China.

Getting to the core of China's situation requires more calculating.

Housing types, for example, must be considered.

and some 60 million units of private housing built over the past 10 years.

and local government-owned land banks may be good for another 20 to 30 million.

About 1 billion square meters worth of public housing (or about 14 million, 70-square-meter units) have been torn down,

leaving about 9 billion square meters of this type of living space nationwide.

This practice has slowed but remains significant in many cities even today.

It's hard to tell how many of these newer flats are out there.

There are similar unknowns about dormitories, such as factory dormitories that house workers from rural areas who migrate to manufacturing regions.

Most of China's more than 200 million migrant workers may be living in such dormitories.

Another consideration is that massive quantities of housing have been springing up in rural communities near major cities,

and when farmland is rezoned for urban development, the region's housing starts falling into the urban category.

Given these unknowns, even though China's new property sales topped 14 percent of GDP in 2009, the situation remains unclear.

Maybe it's confusing by design, since, as noted, firm figures on total urban housing stock are hard to find.

A reasonable guesstimate is that China's total urban stock is around 17 billion square meters, plus or minus 10 percent.

In this context, one useful figure for analysts is China's living space per capita.

Surveys in most cities suggest the average living space is between 28 and 30 square meters per person.

No one seems to know which population segment these surveys cover, although they certainly don't include migrant workers.

Nor is it clear if empty flats are counted.

Based on this limited data, however, it does seem fair to conclude that China does NOT have a housing shortage.

Moreover, its per-capita living space is higher than in Europe and Japan.

Indeed, if we adopt Japan's standard, China already has sufficient urban housing space for every man, woman and child in the country.

Far more important than general data, however, are the housing figures pointing to a huge quantity of empty flats apparently being held only for speculation.

In a normal market, the vacancy rate should be equal to the number of households relocating,

For example, a vacancy rate of 1.5 percent could accommodate a market in which 6 percent of households relocate every year, and the transit time is three months.

If new household formation is 3 percent, and the average period for a property purchase is six months, this factor requires a vacancy rate of another 1.5 percent.

The total normal vacancy rate should be 3 percent, including new properties ready for sale.

it seems the vacancy rate for the nation's private, commercial housing stock is between 25 and 30 percent.

That's at least double what's required in a normal market.

The gap between what's needed and what's available can be viewed as speculative inventory.

The value of this inventory held by speculators is probably around 15 percent of GDP.

It's being kept on ice, just as copper and other commodities are hoarded in anticipation of rising prices, as we have recently pointed out.

If this reasoning is correct, there may be good reason to fear China's quantity bubble.

And the impact of a massive amount of new, speculative inventory coming on line in 2011 could be terrifying indeed.

Right now, tight credit is holding back the market, and supply is piling up on the developer side as inventory.

The government's tightening squeezed buyers of second and third homes, and transaction volumes across the country collapsed.

It's reasonable to assume, therefore, that the  supply would be close to 15 percent of GDP in value this year and in 2011.

That's because when the policy is relaxed – as most expect – speculation will probably revive,

possibly leading to a doubling in the total value of speculative inventory.

Chances are good that policymakers will indeed relax policy.

In some cities, banks are already loosening a bit.

and could get into financial trouble without a decent level of property transactions.

Local governments in China depend on real estate deals for revenue and could default if the market falls too far.

Thus, the central government may loosen policy to help the locals without making a formal announcement.

Such a change of heart would ease short-term government difficulties but double the trouble down the road should the property bubble burst.

So even if China's stock of empty flats is only half that recent estimate of 64.5 million,

it would still be equivalent to 20 percent of all urban households.

That's higher than Taiwan's vacancy rate at the peak of its bubble.

Moreover, if credit rules are loosened, the stock could rise to more than 30 percent.

Excess supply reflects the under-pricing of capital, and China's system is structured to increase supply quickly.

But rising prices alongside rising vacancy rates are surprising.

But China's phenomenon is unique for at least four reasons:

1) A sustained negative real interest rate has led to a falling demand for money and rising appetite for speculation.

Greed and inflation fears are working together to form unprecedented speculative demand for property.

2) A massive amount of gray income is seeking safe haven.

China's gray income of various sorts could be around 10 percent of GDP.

China's rising property market is becoming a preferred place to park this money.

3) Few people in China have experienced a property bubble.

The property crash in the 1990s touched a small segment of society, such as foreigners and state-owned enterprises.

Geographically, it was restricted to the country's freewheeling zones in Hainan, Guangdong and Shanghai.

Most people didn't even know there was a property crash.

This ignorance has led to a lack of fear that's now turbo-charging greed.

They correctly surmise that local governments rely on property deals for money and do all they can to prop up prices.

But their faith in government omnipotence could well be misplaced.

At the end of the day, the property market is bigger than the government.

The government can delay, but not abolish, market forces.

Nevertheless, faith in government is replacing fears of a downside,

and speculative demand will continue to grow as long as credit is available.

Currently, the investment-led growth strategy that's been adopted by all local governments inevitably leads to maximizing revenues from land sales.

So unless limits are put on this strategy, the property market will continue to function "abnormally."

To many observers, the bottom line is that China urgently needs a coherent property strategy.

The massive overhang of empty flats should goad policymakers to act quickly.

If the government eases rules for the property market before adopting a coherent policy, though,

a crash could bring down the economy for an extended period.

One only needs to glance at modern-day price and quantity property bubbles around the world,

to understand the potentially stark consequences if a coherent property policy is NOT formulated and executed as soon as possible,

according to this disturbing analysis in Caixin Online.

The potential implications are serious not simply for China,

but, given its increasing importance in the global economy, the rest of the world as well.